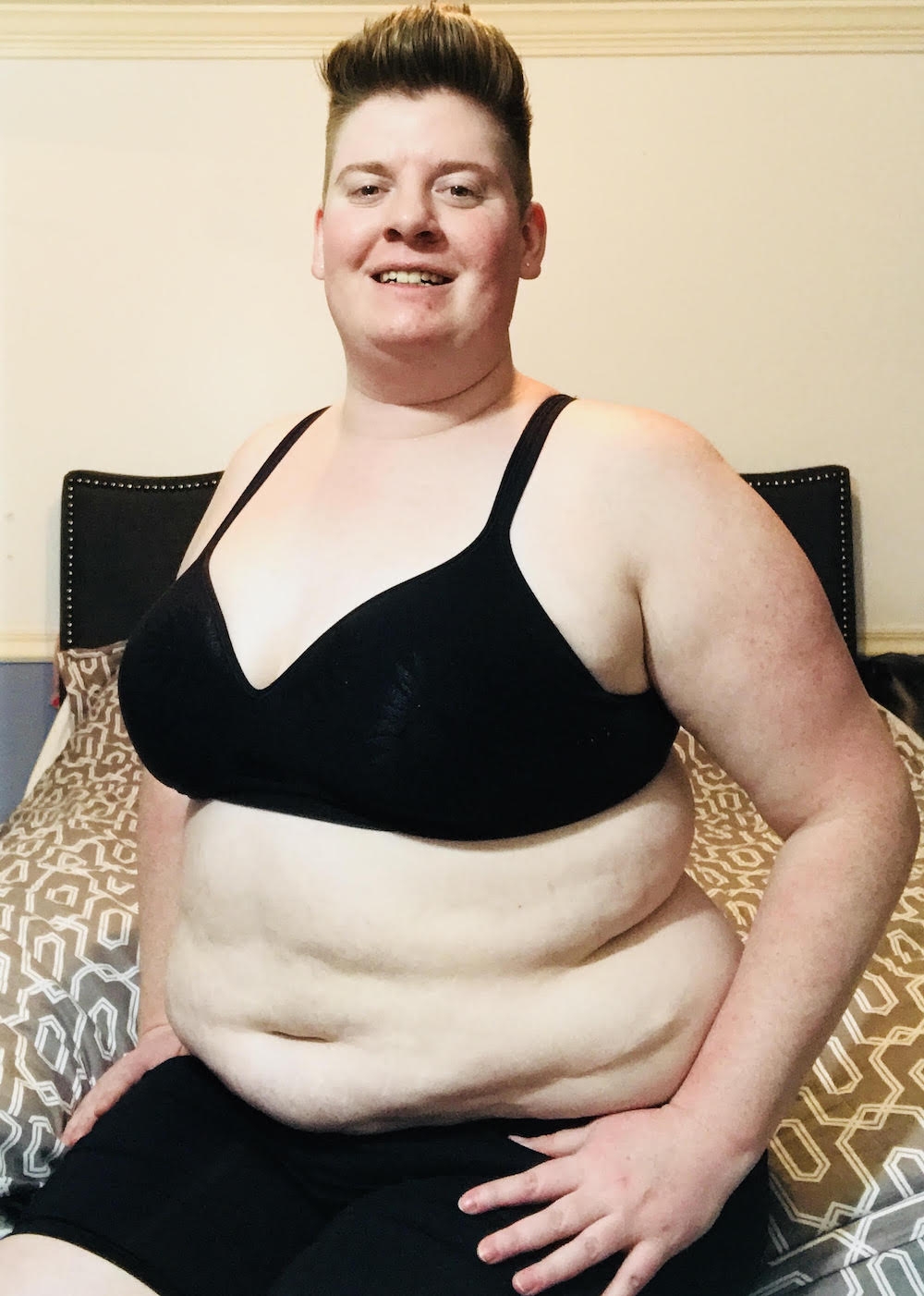 #MyBodyStory is a series of reader submitted pieces about what it’s like to live in your body. Because every body has a story. And every story deserves to be heard. 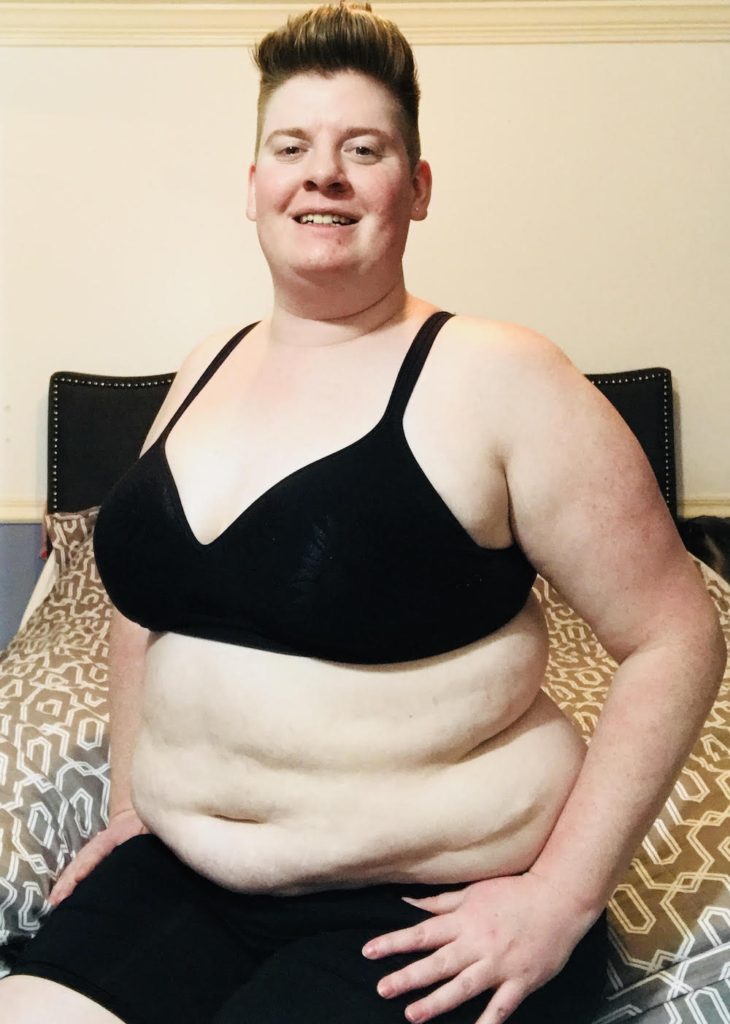 The opinions expressed in #MyBodyStory articles are the writer’s own.

My body story…where to begin. Well, actually I should begin when I was born. I was born with Necrotizing Enterocolitis or Neck. At birth, basically most of my small intestine was dead and they had to remove it. So at 2 weeks old I had major surgery to save my life, leaving behind a massive scar across my whole stomach. That was the beginning of my body story.

Fast forward to 4th grade, I was the tallest girl in my class. I think in my brain it made me think I was fat. I always thought I was heavier than the other girls, but in reality I was very skinny. Neck makes it so your body can’t absorb all the nutrients you need, so it was actually very hard for me to gain weight when I was younger. 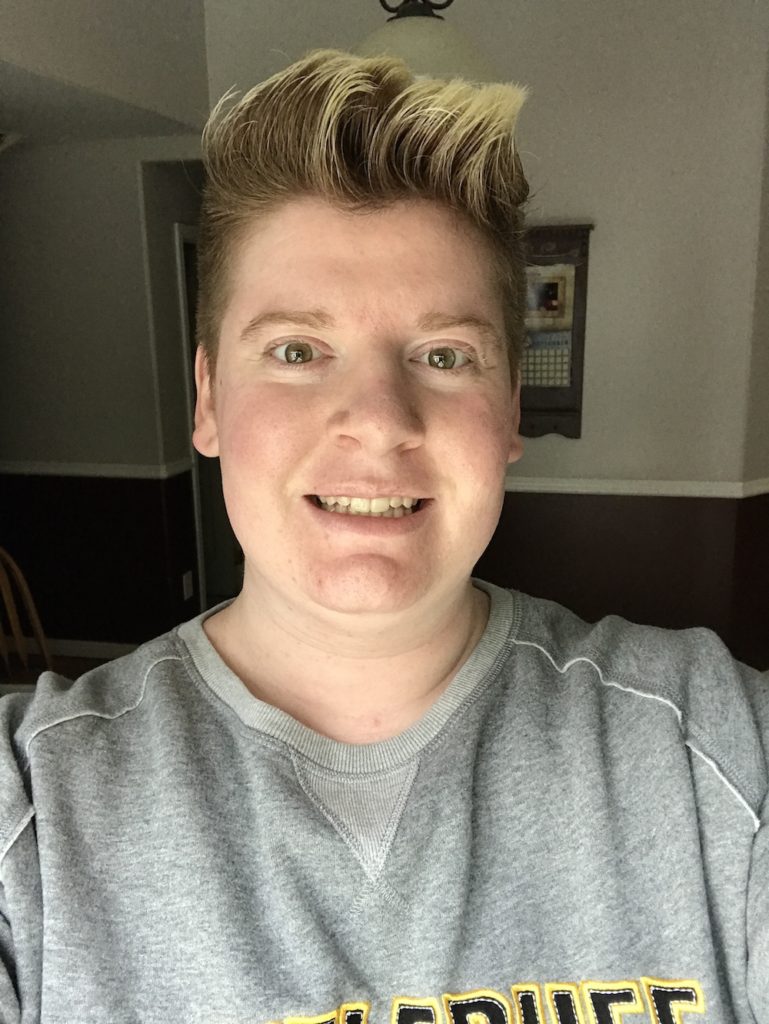 As I grew, my scar which was attached to a muscle, grew inward, making my stomach look like a smiley face. In Jr High when we had to start changing in a room with other girls I started to become even more self-conscious of my body. I wouldn’t change in front of anyone and would always wear under shirts to make sure no one could see my belly.

At the age of 12 I did Weight Watchers with my mom, hoping it would make me lose the absolutely normal teenage weight I had gained, and I would be as skinny as the other girls. That began my toxic relationship with diet culture and changed my relationship with food. I was always making sure I wouldn’t eat too much.

The summer after I turned 16, I begged my parent to let me have surgery to fix my scar. Finally they agreed, and that summer I had surgery to separate the scar from my muscle and lower it so it wasn’t as noticeable. In turn they had to remake my belly button and I was bed ridden for the whole summer. I lost a ton of weight because I couldn’t eat very much and I was “happy” about that.

In high school I developed severe depression. Although no one in my family or friend circle was aware because I hid it well, I started cutting and harming my body in order to feel something. I was good at hiding that too. At one point I remember someone asked me about some fresh cuts that I had forgotten to cover up. I lied and said I had a bunny that freaked out and scratched me. I’m pretty sure they believed me. 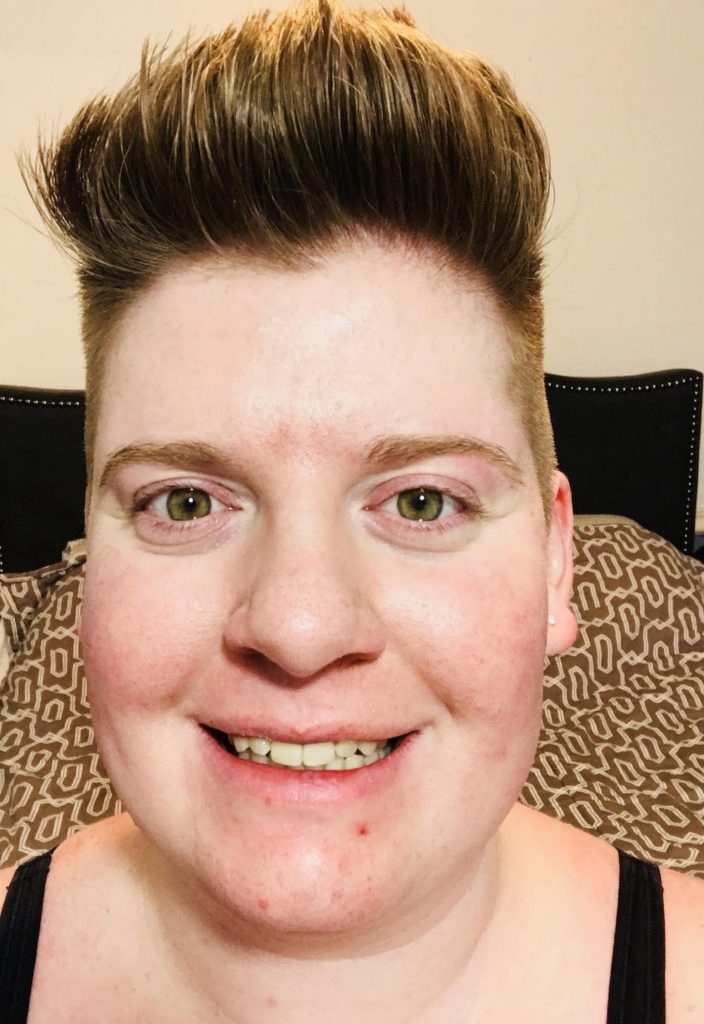 Looking back, I feel like in my high school days I was a compulsive liar in order to hide what was really going on. One day I did reach out to someone and tell them what was going on with me, but a few hours later I texted them and said I had made it all up for attention. They believed me and didn’t escalate it to anyone. I kept self harming, and one time I almost broke my foot smashing a glass bottle onto it, because I wanted someone to notice I was hurting. Even if that meant physically hurting my body in order for them to notice.

When I was 17 I dated a man who was 23 years old. Nothing about the relationship felt right. Especially due to the fact that I was starting to realize that I liked girls. Knowing I wouldn’t be accepted by my family and even some friends, I kept those feelings quiet. I wanted to be loved by someone, even if that meant being in a relationship with someone I didn’t love in return. He also pressured me to do things I didn’t want to do, but I thought that if I didn’t do them he would leave me and I would be alone. Then one day he moved away and I never saw him again. I was hurt, but it was probably the best way that could have ended. 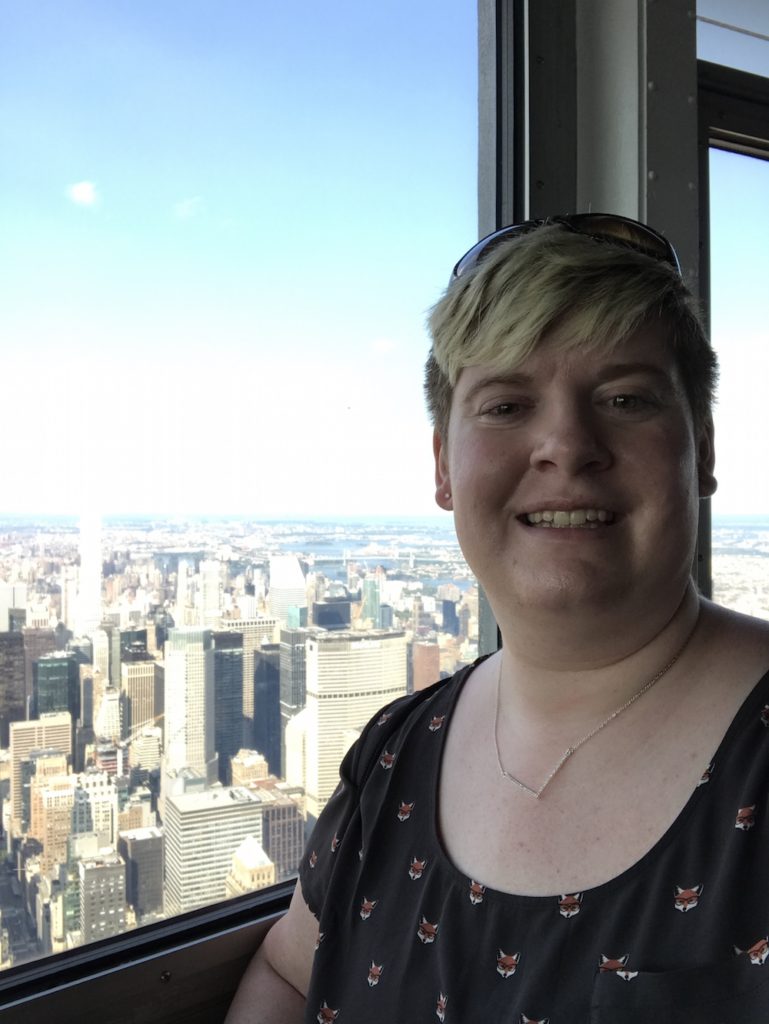 In early college I began binge eating. I was stressed. I had been dieting. I was hiding my sexuality from almost everyone I knew, and I just felt like I couldn’t be myself. This made me gain a lot of weight, and I began hating the way I looked. Gaining weight also made my scar look even weirder than before I had the surgery to fix it. So I gathered extra money from my student loans and used it to have Liposuction on my stomach.

Yes at 19 years old, I had Lipo Suction in order to get skinnier. It worked for a little while too. The inches fell off over that summer and I was down to an “ideal” weight. Everyone remarked at how amazing I looked.

After school, I moved back home and slowly from my binge eating and depression, I started gaining weight again. BUT, I have also slowly begun coming out to more and more people. My mom is the only close relative that knows I’m gay, but I’m not really sure if she truly believes me or accepts me yet.

Last year I was introduced to the Body Positive community online and it has forever changed my life. I still struggle every day, but I am making choices to better my life and myself. My depression still makes appearances, but is nowhere near what it used to be. I am learning to appreciate every curve and squish of my body and I am so very thankful that this body is able to keep me moving and alive after everything it has been through. I am enough, and I need to remember this…always! 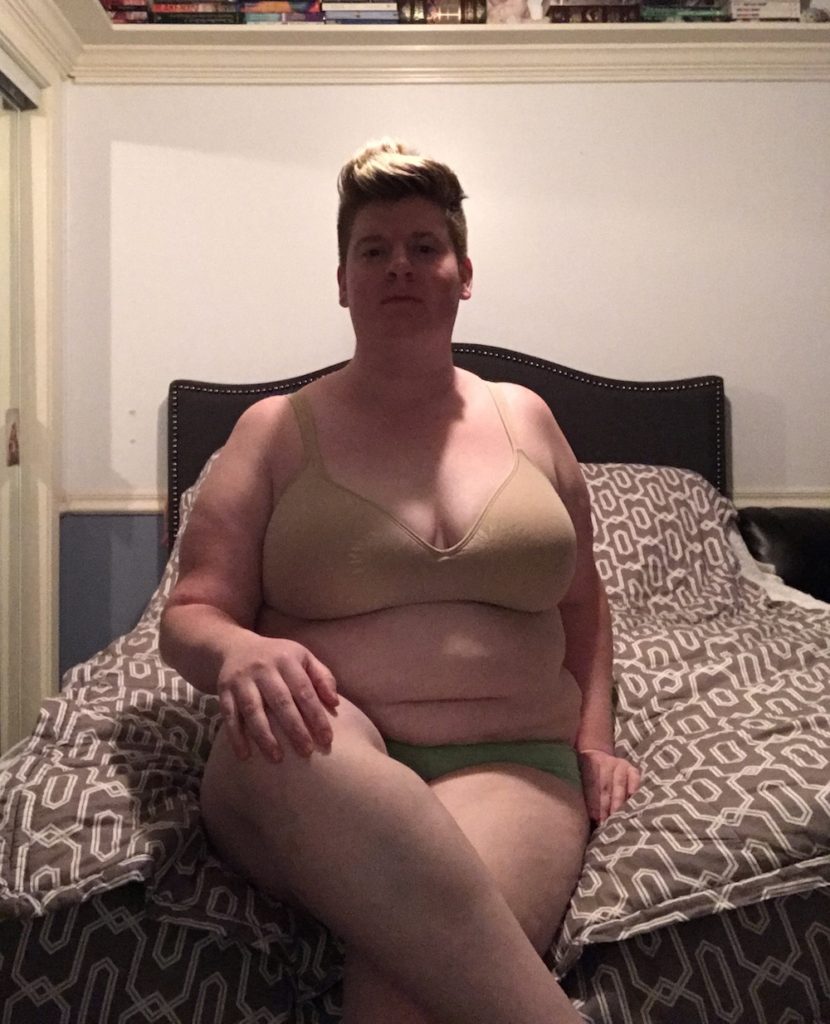 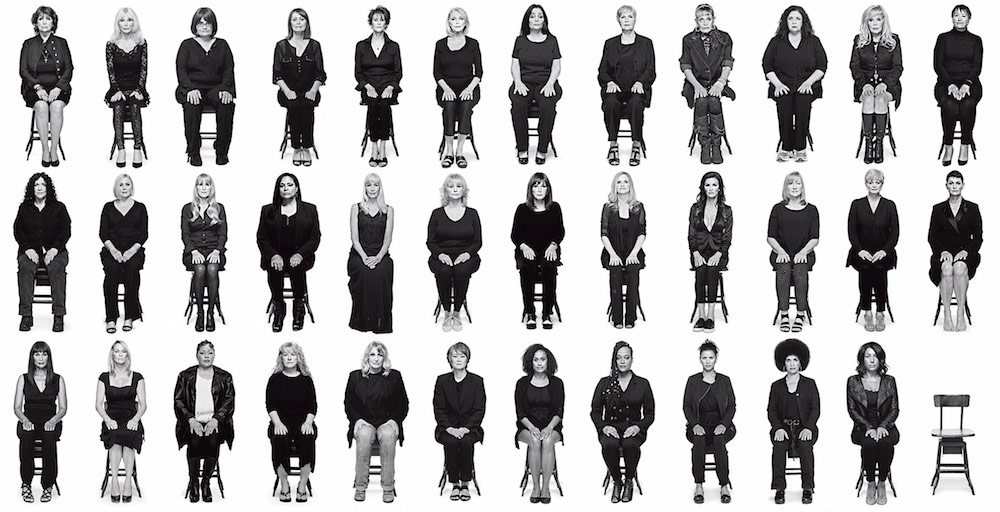 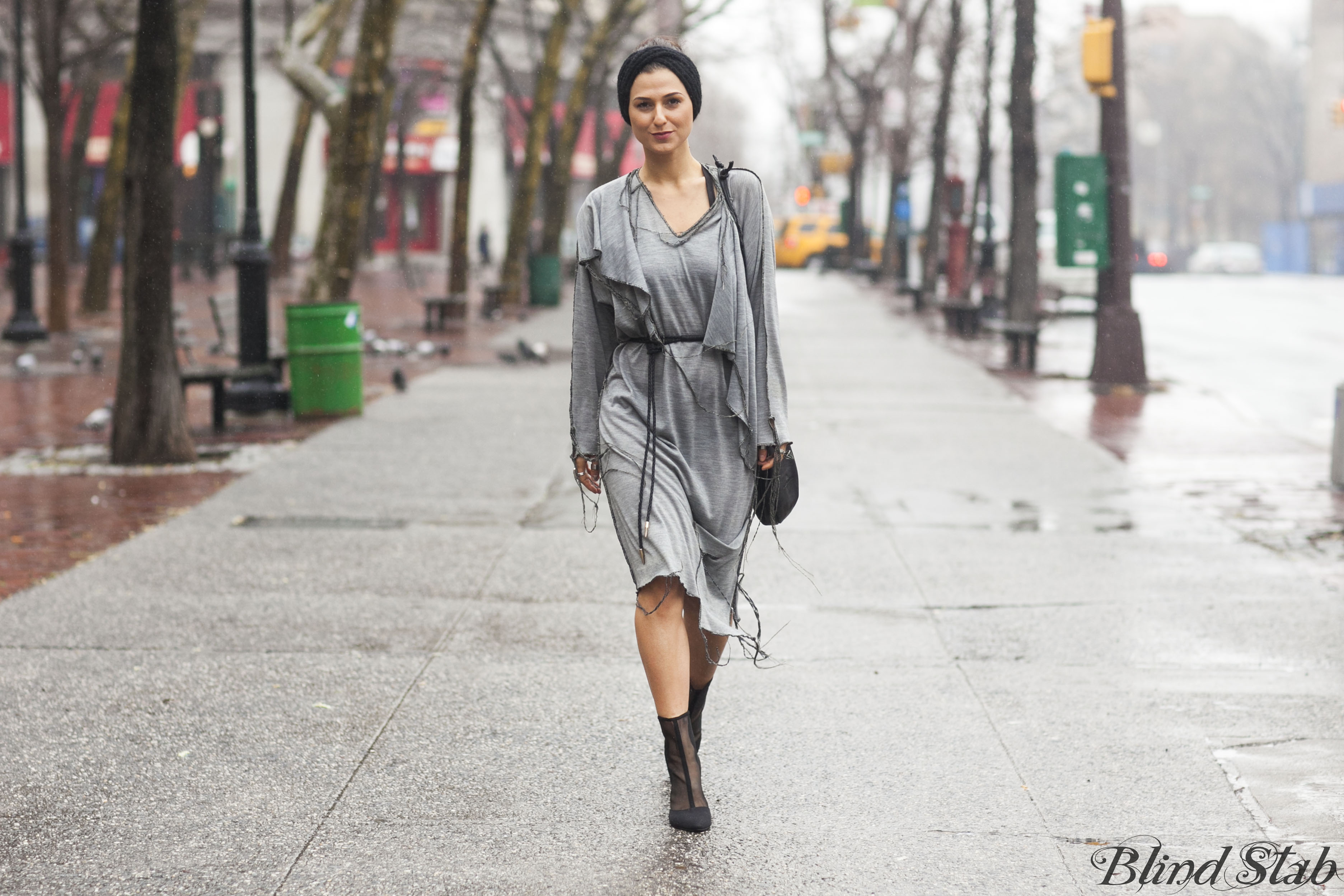 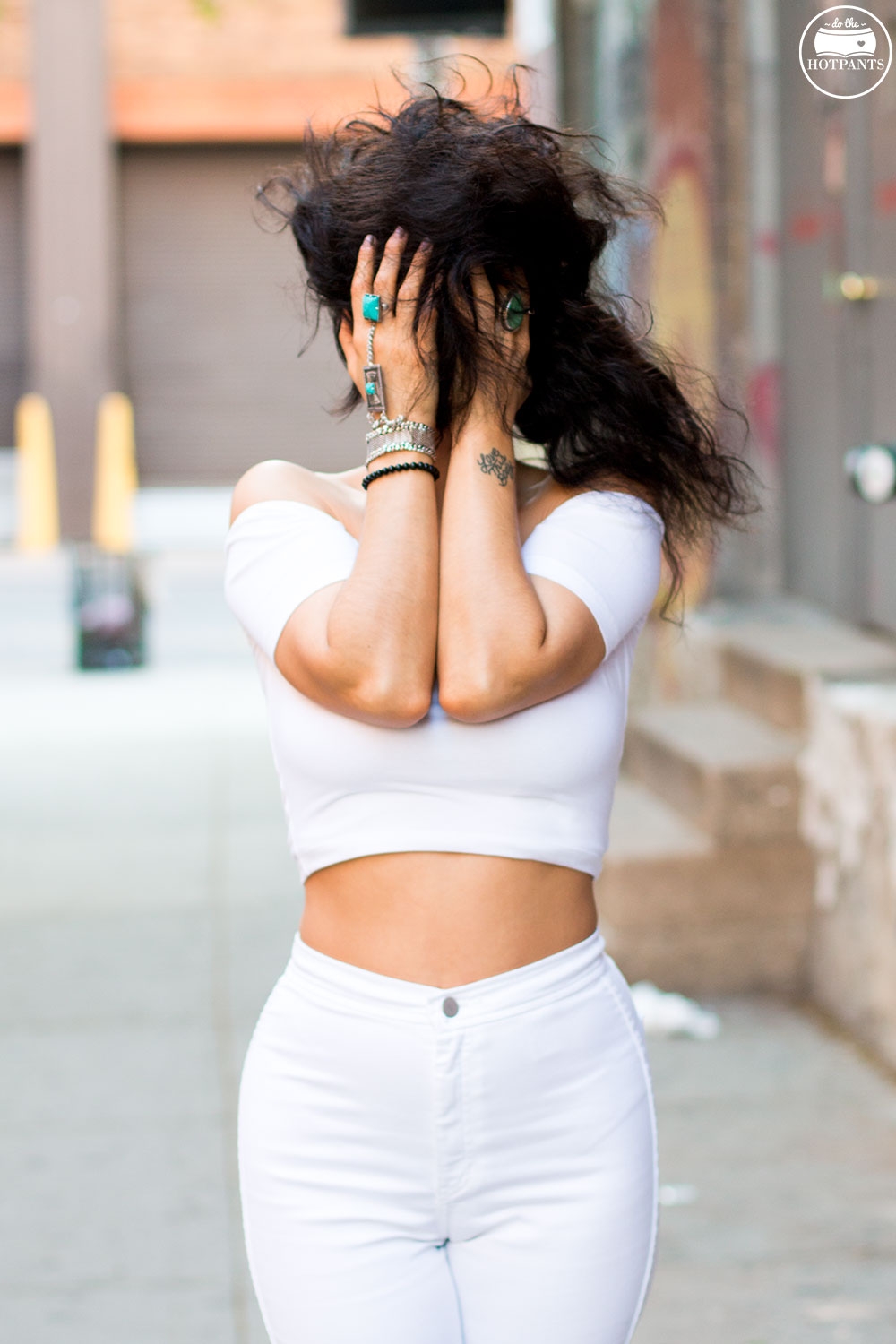